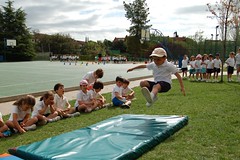 On April 19th Orvalle held its 2nd Mini Olympic Games. After a week of preparations and decorations, the day had ﬁnally arrived. It was a promising day full of excitement and healthy competition in Kindergarten.

Our Kindergarten students wore sports clothes to school and were prepared for the activities of the day. The games started with a parade of the participating teams around the court, and then the cauldron was lit. Six children representing the different continents ran a relay race carrying the Olympic torch that would light the cauldron.

They also made laureate crowns with olive tree leaves to wear when they won and played games that were related to some of the sports.

During the closing ceremony, the participating countries paraded again into the court and proceeded to put out the cauldron. Finally the participants were given their medals which were received with big, proud smiles.

It was truly an exciting day!