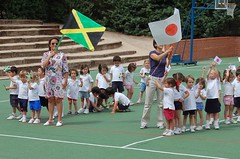 On June 8th we celebrated the first Mini Olympic games in Orvalle. After one week of preparation and decoration, the day arrived at last. It was a very special day full of excitement and competitiveness in Kindergarten.

Our children came dressed with sport wear ready for the activities.

We started the celebration with a parade of the participating teams around the court. Then we proceeded to the lighting of the cauldron. Five children from different continents completed a relay race carrying on the Olympic torch to light the cauldron.

During the closing ceremony, the participating countries paraded again into the court and we proceeded to put out the cauldron. Finally the winning teams received their medals.